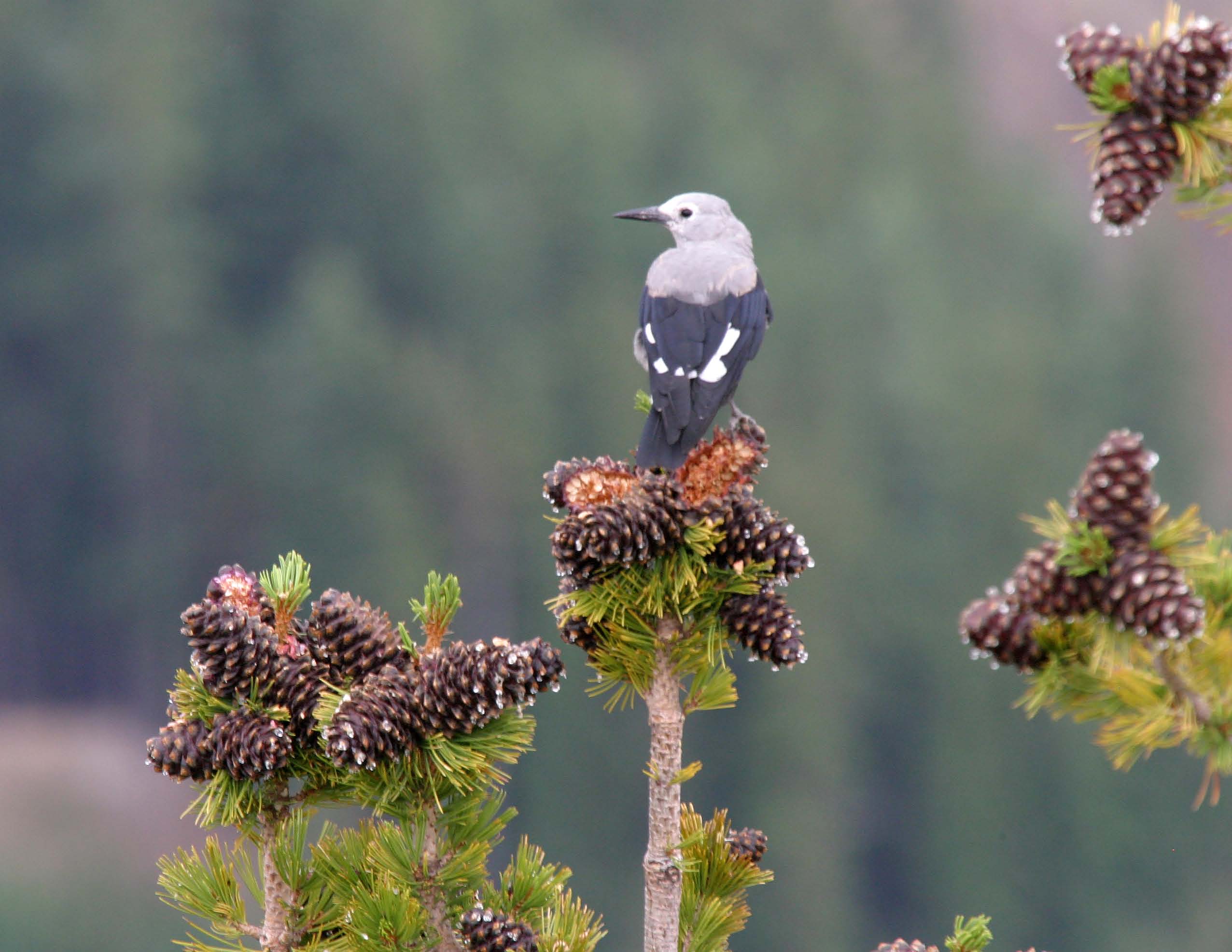 Whitebark pine is important to wildlife primarily because the large and nutritious seeds it produces are an excellent and preferred food source for many animals.  Whitebark pine seeds weigh an average 180 mg compared to 3 – 13 mg for the seeds other trees in whitebark pine forests (McCaughey et al. 1986).  They contain by weight about 52% fat, 21 % carbohydrates, and 21% protein (Lanner and Gilbert 1994). Their large size, high nutrient content, and durability make whitebark pine seeds a high-quality, concentrated, and long-lasting food source.  The seeds remain viable when buried for 12 months or more in squirrel middens or nutcracker caches; other high-elevation foods are more ephemeral.  Typically, birds and mammals harvest almost all the viable seeds produced.

Red Squirrels
Red squirrels focus their foraging activities on whitebark pine seeds whenever they are available, virtually ignoring other foods. They are the most efficient of all whitebark pine seed harvesters because they can cut down and cache cones quickly. Squirrels also guard their caches from most other seed predators – bears are a notable exception. In mixed stands of whitebark pine in Squaw Basin, WY, red squirrels accounted for 63% of all whitebark pine seeds taken by vertebrates (Hutchins and Lanner 1982). However, in nearly pure stands of whitebark pine, squirrel densities tend to be low (Reinhart and Mattson 1990, Mattson 2000) and Clark’s nutcrackers harvest most of the seeds. Squirrel populations are highest where mature whitebark pine is mixed with other conifers. In these stands, alternate foods are available during years of low whitebark pine cone production. Because whitebark pine cones do not open and fall from the tree upon ripening and bears are rarely able to reach the cones while still on the tree, squirrels perform a critical function for bears by harvesting cones and bringing them to ground level (Hutchins and Lanner 1982). Squirrels also do the bears the favor of concentrating cones in large caches in middens of spongy cone debris accumulated over many years of squirrel activity.

Grizzly Bears
Whitebark pine seeds are an important food for grizzly bears (Ursus arctos) and black bears (U. americanus) wherever whitebark pine is common. This has been documented in the Montana and Wyoming in the Whitefish Range (Tisch 1961), East Front of the Rocky Mountains (Mattson and Jonkel 1990), Scapegoat Wilderness (Craighead et al. 1982), and Yellowstone National Park (Kendall 1983). Bears have two options for obtaining seeds; climbing trees to harvest cones or raiding squirrel middens. Cones are available in some areas on stunted trees that bears are able to climb. Because mature grizzly bears have long front claws that make them much less adept at climbing, black bears are more commonly observed feeding on whitebark pine cones in trees. However, in general, both black bears and grizzly bears obtain virtually all their whitebark pine seeds from squirrel caches (Mattson and Jonkel 1990, Mattson and Reinhart 1994).

Whitebark pine seed consumption by grizzly bears in the Yellowstone area is closely correlated with cone crop size (Mattson and Reinhart 1994, Mattson et al 1994). During good cone crop years, Yellowstone bears feed almost exclusively on pine seeds in the autumn (Mattson and Reinhart 1994). Furthermore, seeds from exceptionally heavy cone crops can dominant bear food consumption in the following spring and summer (Kendall 1983, Mattson et al. 1994). Grizzlies in the Yellowstone area obtain one-quarter to two-thirds of their net digested energy from pine seeds, depending on the size of the cone crop and relative abundance of alternative high-quality foods (Mattson at al. 1999). Because whitebark pine seeds are such an important source of energy and dietary fat in the Yellowstone area, the availability and consumption rate of seeds influences grizzly bear demographics. Adult female grizzlies that eat more pine seeds have more surviving cubs than females who eat fewer pine seeds (Mattson 2000). There also is a strong relationship between the whitebark pine cone crop size and grizzly bear survival. During years when pine seeds are scarce, conflicts with humans and the human-caused grizzly bear death rate escalate dramatically (Mattson et al. 1992, Mattson 1998, Pease and Mattson 1999). This is a function of the distributions of whitebark pine and humans. Whitebark pine primarily occurs at high elevation while most towns and roads are located in valleys at lower elevations. When pine seed crops are large, bears are found in whitebark pine stands – far from most humans. When seed crops are small, bears tend to forage for alternative natural foods such as clover or yampa roots that occur at lower elevations closer to human facilities (Mattson et al. 1992).

Clark’s Nutcracker
The Clark’s nutcracker (Nucifraga columbiana) has evolved mutualistic relationships with pines like whitebark pine that have large, wingless seeds. Whitebark pine is a preferred food for the nutcracker which, in turn, is responsible for most whitebark pine dispersal and regeneration. Whitebark pine trees branch profusely which produces a shrubby, flat-topped canopy. Most cones grow horizontally on the tips of the vertical branches that make up most of the crown ensuring that the cones are highly visible and accessible to birds. The nutcracker’s long, pointed, and sturdy bill is ideal for ripping off cone scales and jabbing into the cone to harvest seeds from both unripe and ripe whitebark pine cones (Tomback 1978). Unique to their genus, nutcrackers have a throat pouch which they use to transport seeds from source trees to caching sites and from caches to nests. The maximum number of whitebark pine seeds nutcrackers have been observed to place in the pouch at one time is 150 seeds but the average pouch load is 54-77 seeds (Tomback 1978; D.F Tomback, unpublished data).

Nutcrackers harvest whitebark pine seeds while the cones are still on the tree and bury seeds in numerous small caches in the ground as a supply of food during winter and spring when other foods are scarce. Nutcrackers are so dependent on whitebark pine and other conifer seeds that years of wide-spread cone crop failure can cause nutcracker irruptions in which birds may move en mass hundreds of miles from their normal range (Davis and Williams 1964). Use of pine seed caches to feed nestlings and fledglings enables Clark’s nutcrackers to nest earlier than other passerines, which must wait until insects are available for feeding. By the next winter, the more mature and experienced nutcracker offspring may be better able to survive (Tomback 1978).

Whitebark pine depends on nutcrackers almost exclusively for seed dispersal and regeneration. Nutcrackers cache whitebark pine seeds a few yards to as far as 14 miles away from the seed source (Vander Wall and Balda 1977). Most cache sites are steep, windswept, south-facing slopes that accumulate little snow and experience early snowmelt or are in open, disturbed terrain, especially recent burns – the types of sites most suitable for whitebark pine establishment. Nutcrackers typically store 3 to 5 seeds per cache buried 1 to 3 cm deep and estimates of the number of whitebark pine seeds stored by an individual nutcracker in one year range from 32,000 to 98,000 (Hutchins and Lanner 1982, Tomback 1982). As this is far more than a bird needs for winter and spring food, the seeds in many caches are never retrieved and become the source of whitebark pine regeneration.