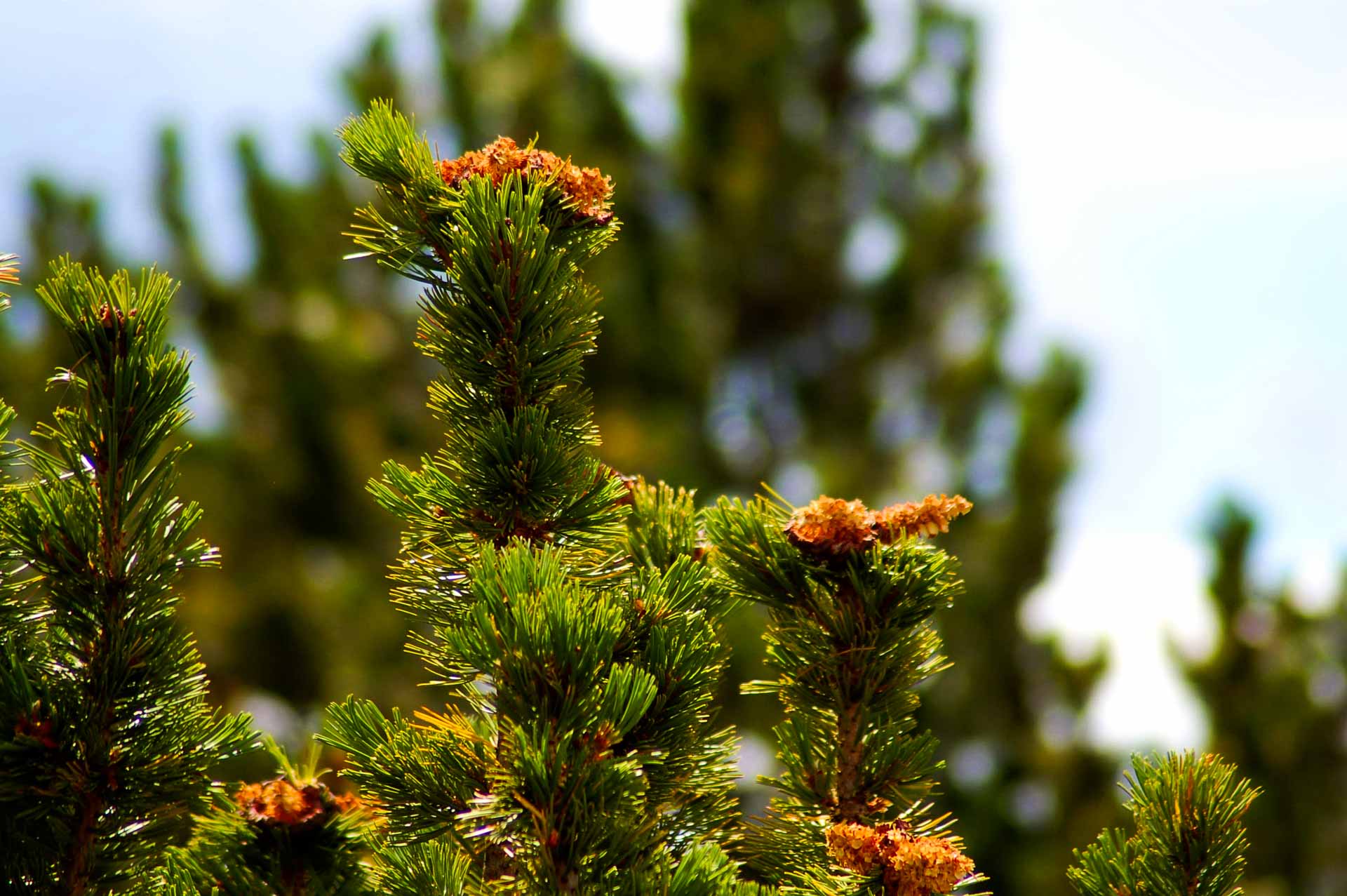 Whitebark pine is a slow growing, long-lived, stone pine (subgenus Strobus, section Strobus, subsection Cembrae} of high-elevationforests and timberlines of the northwestern United States and southwestern Canada. It is one of five stone pines worldwide and the only stone pine in North America. The northern distribution limit is the Canadian Coastal Mountains of British Columbia and its southern limit is in the California Sierra Nevada Mountains. The distribution of whitebark is split between the inland Rocky Mountain Ranges and the Coastal Ranges of the Cascade, and Sierra Nevada. It occupies harsh, cold sites characterized by rocky, poorly developed soils and snowy, wind-swept exposures (Arno and Hoff 1989). Throughout its range, whitebark pine may occur as a climax alpine species, including a krummholz form in communities above tree line, or as a seral species or climax co-dominant with subalpine fir (Abies lasiocarpa). Other common tree associates in the Northern Rockies are lodgepole pine (Pinus contorta),Engelmann spruce (Picea engelmannii), and less commonly mountain hemlock (Tsuga mertensiana) and alpine larch (Larix lyallii)(Arno and Hoff 1989). It is generally considered intolerant to moderately intolerant of shade. 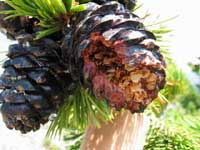 Whitebark pine seeds are NOT wind dispersed; they develop in indehiscent cones that are harvested by Clark’s nutcracker (Nucifraga columbiana). Nutcrackers pry open the cone scales with their bill and slip seeds into a pouch under their tongue for transport. They cache or consume seeds and those not retrieved from caches may germinate and become established as seedlings (Lanner 1980, Tomback 1978, 1982, Hutchins and Lanner 1982). Corvids, such as Clark’s nutcracker and other Nucifraga species, have evolved with stone pines over centuries and are critical components in pine regeneration dynamics, ultimately responsible for the geographic range, spacing, successional status, and genetic sof the stone pines (Hutchins and Lanner 1982, Lanner 1982, Tomback 1982, Lanner 1996).

Whitebark pine seeds provide a high fat, high-energy food source for many animal species. Red squirrels (Tamiasciurus hudsonicus) harvest cones and store them in middens on the forest floor. Black bears (Ursus americana) and the endangered grizzly bear (Ursus arctos horriblis) raid these middens for the energy-rich food that the seeds provide (Kendall 1983, Mattson and Jonkel 1990, Pease and Mattson 1999). Because of the dependence of many animal species on this food source, whitebark pine is considered keystone species of the subalpine forests (Lanner 1996, Tomback et al. 2001). 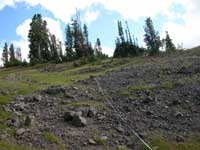 Whitebark pine is also valued for watershed protection (Farnes 1990). In the cold, semi-arid mountain ranges of the northern Rocky Mountains most annual precipitation falls as snow and the greatest amounts occur at high elevations. The physical position of trees on the landscape and the up-swept branches of the crown provide shade to delay snowmelt and to retain snowdrifts until early to mid-summer. Worldwide, whitebark pine is sixteenth on the longest lived tree species list (OLDLIST) after Douglas-fir (Pseudotsuga menziesii) (Brown 1996) The oldest whitebark pine exceeds 1275 years in age and occurs in the mountains of central Idaho (Perkins and Swetnam 1996). Tree ring chronologies have been constructed from this and other old living trees and from dead logs and snags (Perkins and Swetnam 1996). Such chronologies are being used to reconstruct seasonal climate variables.