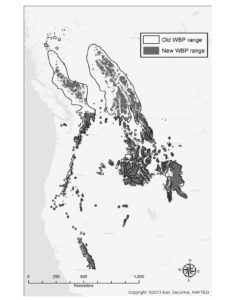 Whitebark (WBP) and limber (LP) pine are both legally listed as Endangered under The Wildlife Act in the Province of Alberta (Government of Alberta 2010), and WBP is also listed as Endangered in Canada federally under the Species at Risk Act (SARA; Government of Canada 2012). As recovery planning for both species began, it became apparent that existing range maps (e.g., Critchfield and Little 1966, Little 1971, Ogilvie 1989) were misleading and out-of-date in Canada. In particular, portions of the range were mapped with different standards, resulting in large polygons of apparently contiguous occurrence in Canada and a more finely grained pattern of smaller, often disjunct polygons in the U.S.A.

Thus we began the process of building new range maps to a common standard of scale and minimum polygon size. We gathered existing GIS layers from individuals and agencies(ACIMS 2013), applying lower elevational cut-offs (for WBP), and buffering locations of plots, transects and random observations. We then did an iterative process of sending the resulting maps out to field staff for review, tweaking the maps based on responses, and sending them out again. As we solicited information from US colleagues to make a seamless transition across the international border, we were encouraged to expand our work to the entire range for both species in North America, which we did. The improved resolution is especially obvious for whitebark pine (Fig. 1), while the limber pine range had fewer changes (Fig. 2). 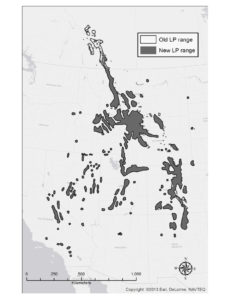 In the interest of making these maps widely available, and to encourage corrections and feedback, this range map project is being hosted here on the Whitebark Pine Ecosystem Foundation’s website. You will find GIS files in different formats, as well as some ready-to-use range maps in black-and-white and color. Note that these are BROAD scale maps, not suitable at the level of stand mapping, for instance.

We suggest three ways to provide feedback so that we can continue to improve the accuracy of these maps as new information becomes available: