Why We Are Concerned About the Future of Whitebark Pine

Whitebark pine (Pinus albicaulis) is regarded as a keystone or “foundation” species for its value in promoting biodiversity (Ellison et al. 2005). Keystone species have a “pervasive influence on the WBPrest of the community, and the effects of their removal cascade down through the community” (Smith and Smith, 2001).

In Canada, the majority of whitebark pine also occurs on public lands, both federal and provincial, including extensive protected areas (parks, wilderness areas, ecological reserves) (P. Achuff, unpublished data). Given the protected status of most populations, and their distribution at high elevations, it is paradoxical that this species is severely threatened by two anthropogenic problems—introduced disease and fire suppression—which are complicated by recent upsurges in mountain pine beetle (Dendroctonus ponderosae).

White Pine Blister Rust
White pine blister rust, a fungal disease caused by the pathogen Cronartium ribicola, was inadvertently introduced to Vancouver, British Columbia in 1910. In the past century, it has spread nearly rangewide in P. albicaulis, except for interior Great Basin ranges (Kendall and Keane, 2001, McDonald and Hoff, 2001, Tomback and Achuff, MS.). The highest infection levels in P. albicaulis , 50-100% , occur in the northwestern U. S. and southwestern Canada (Kendall and Keane, 2001). Whitebark pine mortality from the combination of blister rust and mountain pine beetle exceeds 50% in areas including Glacier National Park, northwestern Montana, north-central Idaho, and northern Washington (Kendall and Keane, 2001), and both infection levels and mortality are increasing rapidly in the Cascades and Sierra Nevada Range (Table 1).

Mountain Pine Beetle
Between 1909 and 1940 and again from the 1970s to the 1980s, widespread mountain pine beetle outbreaks killed P. albicaulisthroughout the U.S. Rocky Mountains, producing “ghost forests” (Arno and Hoff, 1990, and references therein, Wood and Unger, 1996, Kendall and Keane, 2001). Mountain pine beetle infestations are again at high levels within whitebark pine communities in the northern U. S. Rocky Mountains (Logan and Powell,2001). There is some evidence that whitebark pine is now the preferred host in many regions of the northern Rockies. For example, recent annual aerial surveys detected a dramatic increase in mountain pine beetle activity in the Selkirk Mountains of northern Idaho between 1998 and 1999 (Kegley et al., 2001). Recent aerial surveys indicate large-scale outbreaks of beetles in whitebark pine in northern Idaho, west-central and southwestern Montana, and the Greater Yellowstone Ecosystem (Gibson, 2006). In the Greater Yellowstone Ecosystem, more than 700,000 whitebark pines were killed by beetles in 2004.

Individual whitebark pine trees can be protected by application of verbenone or insecticides such as carbaryl prior to annual beetle flights. This requires that potentially genetically resistant trees, or those with other important values, be identified and then protected every summer until the mountain pine beetle outbreak is over.

Synergisms
With historically high mortality of whitebark pine from mountain pine beetle, and more recently from both blister rust and beetle outbreaks, unanticipated consequences are becoming evident. For example, Tomback et al. (1995) found unexpectedly low densities of whitebark pine regeneration in the Sundance Burn in the Selkirk Range of northern Idaho 25 years after stand-replacing fire, and 29% of the regeneration was infected by blister rust. The reduction in regeneration density was attributed to a severely reduced whitebark pine seed source, from past mountain pine beetle outbreaks and blister rust. Furthermore, a recent study suggests that in highly damaged whitebark pine stands, most seeds produced are consumed by nutcrackers and red squirrels (Tamiasciurus hudsonicus) rather than dispersed (McKinney and Tomback MS.).

These observations have important implications: Heavily damaged P. albicaulis stands do not produce enough seeds to lead to natural regeneration after wildland or prescribed fire. Even if genetically blister rust-resistant trees were to survive in these stands, their seeds would not be dispersed. In addition, all whitebark pine trees, including those that may harbor genetic resistance, are vulnerable to infestation by mountain pine beetle and rapid death.

Successional Replacement of Whitebark Pine
In some parts of the range of whitebark pine, particularly the northern Rocky Mountains of the United States and intermountain region, decades of fire suppression have led to both progressive loss of whitebark pine basal area and successional replacement by more shade-tolerant trees, such as spruce and fir. This process has been well described for P. albicaulis communities in the northern Rocky Mountains of the United States (Arno, 2001, and Keane, 2001; see also Murray et al., 2000). For example, Murray et al. (1998) show that areal extent and fire frequency abruptly declined in 1873 in the Bitterroot Mountains (Murray et al., 1998). Advanced succession is another factor leading to regional declines in whitebark pine communities, further complicating losses caused by blister rust and mountain pine beetle.

A Call To Action

Blister rust continues to spread throughout the range of whitebark pine, and continues to intensify where it occurs, resulting in increasing numbers of infected trees, increasing levels of damage, and growing mortality. Expanding mountain pine beetle outbreaks threaten the foundation of the restoration strategy: the existence of individual whitebark pine with genetic resistance to white pine blister rust. These trees, if unprotected, can be infested and killed within a year. For some regions, the window of opportunity is closing for whitebark pine restoration, and we urge that management strategies be devised and implemented as quickly as possible. For other regions, planning for proactive management strategies should begin.

Whitebark pine is too important a species in terms of ecosystem services and western forest biodiversity to be allowed to slowly fade from the western landscape. 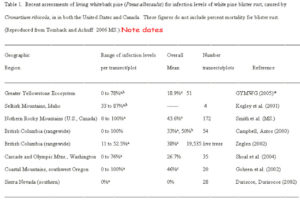