Whitebark pine fire regimes are quite variable in space and time, but in general, three types of fires define the complex fire regimes in whitebark pine forests (Arno and Hoff 1990; Morgan and others 1994). Some whitebark pine stands experience recurrent non-lethal surface fires (often called underburns or low severity fires) because of sparse fuel loadings and unique topographical settings. Many of these sites are mostly found in the southern parts of the species range in the Rocky Mountains, and represent only a small portion of existing whitebark pine forests (less than 10 percent) (Morgan and others 1994).  These underburns tend to kill many of the fire-sensitive subalpine fir and numerous whitebark pine trees will survive the low intensity fires. 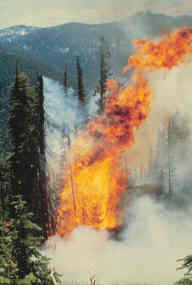 The more common, mixed-severity fire regime is characterized by fires of severities that vary in space and time, creating complex patterns of tree survival and mortality on the landscape. Mixed severity fires can occur at 60- to 300-year intervals, and sometimes over 500 years, depending on drought cycles, fuel conditions, and wind events (Arno and Hoff 1990; Morgan and others 1994). Individual fires can be non-lethal surface fires with differential mortality, stand-replacement fires, and most often, fires that contain elements of both (Morgan and others 1994). Sometimes fires burn in sparse ground fuels at low severities, killing the smallest trees and the most fire-susceptible overstory species, often subalpine fir. Severities increase if the fire enters areas with high fuel loads or if it is especially windy or droughty because these situations facilitate fire’s entrance into tree crowns, thereby creating patches of high fire-killed mortality (Lasko 1990). Burned patches are often 1 to 30 ha in size, depending on topography and fuels, and these openings provide important caching habitat for the Clark’s nutcracker (Norment 1991; Tomback and others 1990). 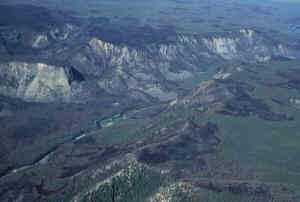 ong time intervals (greater than 250 years) (Arno 1986; Keane and others 1994; Morgan and others 1994) (Figure 1.8). Stand-replacement fires also occurred within mixed-severity fire regimes, but as infrequent events. These fires are usually wind-driven and often originate in lower, forested stands (Murray and others 1998).  These large, high severity fires create large burned over patches on the landscape and many parts of this patch are distant from tree seed sources.  These patches often have greater than 95 percent fire-caused tree mortality.

Whitebark pine benefits from wildland fire because it is better adapted to surviving and regenerating after fire than its associated shade‑tolerant trees (Arno and Hoff 1990). Whitebark pine is able to survive low severity fires better than its competitors because it has somewhat 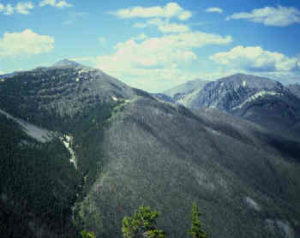